The Bigger Picture of Sex.

I believe in the bigger picture. I agree, that most of the time, we are too close to the picture of our own lives to see it, but I believe in it.
I also believe that you need one or two people in your life, who understand your values, and your insecurities, who, are able to step back and look at the bigger picture for you. I am thankful that I have those people. Not everyone does.

It started a week or so ago, when the Valentine's Day Movie on tv was "Pretty Woman". At first, I was a bit startled.....then it got under my skin. Pretty Woman? Really?

I went to a movie with a friend on Monday.....How to be Single....and it was funny, for the most part, I enjoyed it. But I also have the ability to look at the bigger picture of it all, and understand that these standards of casual sex, and drinking so much so we don't know who we are sleeping with, are unhealthy, and unrealistic....when trying to care for, and protect your heart....your soul.

We live in a society that believes that "50 Shades of Grey" is romance. Shortly after the book came out, I read a review on it, written by a social worker. The SW concluded, that if this had been written in someone's case file, it could in some instances be considered abuse.

Playboy did an interview with John Mayer...here is a piece of it:
December 1, 2012

Playboy: Masturbation for you is as good as sex?
Mayer: Absolutely, because during sex, I’m just going to run a filmstrip. I’m still masturbating. That’s what you do when you’re 30, 31, 32. This is my problem now: Rather than meet somebody new, I would rather go home and replay the amazing experiences I’ve already had.
Playboy: You’d rather jerk off to an ex-girlfriend than meet someone new?
Mayer: Yeah. What that explains is that I’m more comfortable in my imagination than I am in actual human discovery. The best days of my life are when I’ve dreamed about a sexual encounter with someone I’ve already been with. When that happens, I cannot lay off myself.
So, let me get this straight. You'd rather jack off.....than be with a girl? Hmmmm....things to think about.
I am frustrated by this society that is normalizing these behaviours. We are continually allowing the boundary lines to get pushed further and further...and our own consciences to get quieter and quieter.
Society continually sings that 'we are here for a good time, not a long time.' And that's fine...for you...but what about the generations to come.
Don't you get the fact that when we as 'normal' people allow things to happen.....the deviants of this world...the men who sleep with babies, or the mother who sells her daughter or son for sex at nights to get money,  or the father who was sleeping with his 6 year old daughter every night in Cambodia.......they push their lines too? Do you not see the bigger picture here?
Come on people.....step up. Draw your lines in the sand. Say no. Have sex? Sure go for it......romanticizing abuse and sexual slavery......enough already.

You saw the Picture up top.....here's the bigger picture. 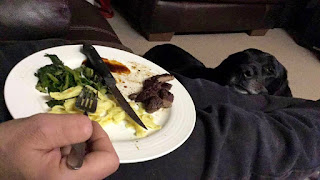 The look of love in his eyes....was actually for your steak.


Posted by Unknown at 10:54 pm
Email ThisBlogThis!Share to TwitterShare to FacebookShare to Pinterest