Friend on a Box. 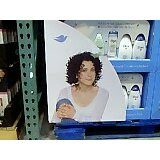 Well its not every day that you are meandering through Costco and you see one of your dearest friends on a box. I like Dove Products, so I was looking to see what they could sell me.....and then I started to shriek. My other friend was confused because although she also likes their products, it was not worth the yelling that was coming out of my mouth.....as I yanked my new, handy camera phone out of my purse, and started snapping shots.
My friend Pam won a contest about how she likes her hair.....long story short...she got sent to Toronto a year and a half ago for a photo shoot and was in an ad. They have used her photo periodically since then....apparently they own her now.
When I called tonite to tell her the Costco news....she replied without thinking, " I wish they would tell me when they are going to use me."
Celebrity Snob.

Posted by Robyn at 10:09 pm
Email ThisBlogThis!Share to TwitterShare to FacebookShare to Pinterest