11 rats in pajamas, 18 pairs of underwear and 1 passport application 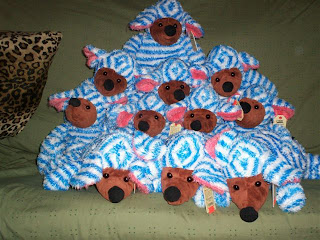 .....it all started two years ago, when our youth group went to work in an orphanage in Mexico. Apparently if the street children had underwear on, they were less likely to be sexually assaulted. And so, I set my mind on buying every sale pair of underwear at Old Navy....and succeeded. They left on that trip with 150 pairs of underwear.
The trip is being planned once againg for this year....and I being a youth sponsor was given the opportunity to go.
I didn't feel like it. I am tired. I didn't always want to be incharge...especially when I have to take vacation time to do it......and so I prayed.....half-heartedly. "God," I mumbled, "if you want me to go.....let me know."
And thankfully, He didnt.....................................until yesterday. I was honestly believing that I was off the hook. I was feeling a bit drunk on time...thinking of how I would spend my vacation this year.....maybe somewhere special....exploring or laying on a sandy beach.
I was at work, checking on my staff....searching them out....when the unthinkable happened. God snuck up behind me. ......when I wasn't paying attention.....He whispered in my ear.........."You're going to Mexico." It wasn't a sing-songy mocking voice, although I did note a hint of amusement in His voice. I was that kid in school who sunk down in his desk, hoping not to be noticed by the teacher, only to hear my name called.
Hhhmmm....Mexico, hey? So I turned around, walked into the office, where my boss was sitting, and picked up the calender....."In May," I said, " I need time off to go away and help little Mexican orphans." She smiled, and because she knows my heart...and my allegiance, she nodded. No problem.
And so, as it was, there were ugly stuffed rats in pajamas on sale, for cheap, and I bought 11, and I started my panty collection for this year as well.
This story would be good enough, except for this one final twist. Tonight I called my mentor, who I had told I wasn't interested in the trip, and told her I was going. Her response? "Oh, good, I've been waiting for your call.....I sensed that you needed to go, and so have been praying for you this week. I expected you to call this week."
Her and God, they are pretty sneaky together.
Posted by Robyn at 11:03 pm
Email ThisBlogThis!Share to TwitterShare to FacebookShare to Pinterest