My Love for Guns

When I was in my early 20's my boyfriend's father had a high position with the RCMP office in Winnipeg. One weekend, he took us into the gun "holy of holies", a room which consisted of a wall made into a screen, with bad guys who would jump out at you in video form. You had a gun, and had to try and kill them......I lost every time. Then he took us into the basement, where he let us shoot targets for a while. It was weird.....I wasn't very good.
Tonight I redeemed myself. Tonight, at our community drop in, I played laser tag. It was awesome. I haven't had that much fun in a long time.....and I was really pretty good. When all the other children were running around with their guns flailing, I stuck to the walls, and stayed low. And, it paid off. I was stealth. I was sneaky. Maybe I have missed my calling.....maybe I should be in law enforcement.....or......maybe I just watch too much tv. 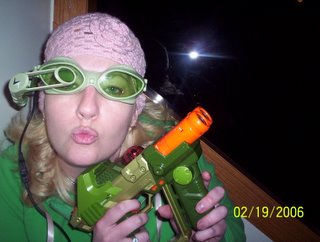 Posted by Robyn at 10:51 pm
Email ThisBlogThis!Share to TwitterShare to FacebookShare to Pinterest