For my birthday I asked for and received a travel mug from Starbucks. It's not just any travel mug, it is clear, and it has a spot for you to customize and insert a template. So, being very excited for such an experience, last night, I dug out 34 years worth of photos....and slowly remembered.
I was trying to figure out a theme for the cup....."Hairstyles of Robyn", "Ex-boyfriends of Robyn," (of course all those pictures have been torn in half)
I decided to go with pics that give good memories.
Now my printer is a stupid printer and doesn't work well with others, and I am without a scanner, so the plan was to go to my parents to work on my project.
I let my dad know that I was coming for such a purpose, and he agreed to be the helper.

.....the helper had some big plans. He wanted to cut and paste in the program, and just print out one big pic instead of individuals and hard pasting them together. Now we are not so versed in this method, but my brother had done it, so then, so should my father.
After a couple of hours, and phone calls and pacing (that was me), we finally made copies, printed them off, hard pasted them, and then put it together.
So here is my cup....do you like my memories? 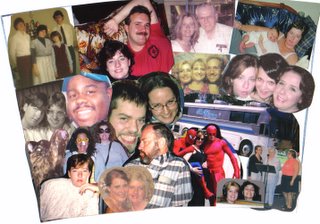 Posted by Robyn at 5:55 pm
Email ThisBlogThis!Share to TwitterShare to FacebookShare to Pinterest