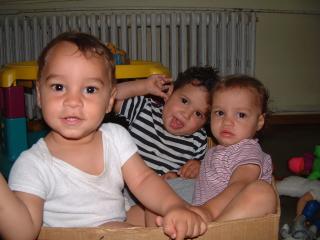 His name was Alex.

My friend recently returned from Romania, where she spent the summer working in a Swedish run orphanage. Today, she told me of her trip.
She fell in love there, something completely unexpected. I've never seen her fall in love, and so for me, it was an incredible thing, to watch this woman, who usually builds her walls to protect her heart, let someone in. She talked about him, and her eyes lit up. How he looked, how he smelled, how he held her hand, how his smile would make her heart flip. He wasn't a man of many words, but his actions, would speak volumes. He is from Romania, and she is praying to God, that she will see him again. He is one year old.
He is just one of the many children stuck in a country that is more concerned about appearances, then the well-being of it's children. He is a gypsy, and so, unwanted by society; an outcast.
Romania had a problem with orphans, and wanted to hide the problem, so the changed the name of orphanages, to "institutions", and closed all the borders for adoption. It appears that the problem has been solved. It, in fact, has not.
Every year, Christians from all over the world, go to volunteer at the orphanage for a few weeks or a few years,trying to make a difference, trying to change the lives of these children. Instead, it is their hearts that change.
She shared with me of three women, who, have decided to stay in Romania for five years, and become foster parents to particular children who hold their hearts. After five years of living in Romania, the government MAY consider you for adoption....and it's not a garantee. These women live there, with the support of their churches and families, just for the chance to become a legal mother, to those who have already become their children; their own.
God be with them as they do what many of us could never do, give our whole hearts, expecting nothing in return, except a chance.
Posted by Robyn at 10:02 pm
Email ThisBlogThis!Share to TwitterShare to FacebookShare to Pinterest